The town of Bergen Op Zoom in the Netherlands is largely unremarkable. It’s the kind of place that is only spoken of in terms of what it’s close to  – in this case, Antwerp, a city not even in the same country. East of this unremarkable town is a small wood, unremarkable to the uninquisitive eyes driving by on the neighbouring freeway. And last in this litany of unremarkability is the remarkable: the red maple leaf on the Canadian flag flying over several green acres.

This is Canada. It’s the final resting place of 1,118 of her sons who fell an ocean away from their home and native land, driven by the true patriot love their country commanded. Dutch children come and tend the graves in an act of national service and remembrance, for it was the First Canadian Corps, under Lt. General Charles Foulkes, who played the largest role in liberating their nation. It was to Foulkes that Col. Johannes Blaskowitz surrendered on May 5th, 1945.

I was at the Canadian War Cemetery in Bergen Op Zoom 50 years later. Every man thinks meanly of himself for not having been a soldier, wrote Samuel Johnson, and I was and am no exception. I was there to make what contribution I could: perform in an ensemble with other young Canadian musicians for the many ceremonies that took place that year. We, in our youth and in our ignorance, were confronted with the brutal, unremitting fact that there was no way we could ever understand or appreciate the magnitude of the sacrifice of those who served, even of those who returned from the war, and came back to Bergen Op Zoom fifty years later to stand in the sunlight and pay tribute to their colleagues. And we perforce thought meanly of ourselves. And we still do.

I remember the graves, marked with their distinctive maple leafs. I remember that of Eric Ormond Brant Smythe, for reasons I cannot fathom. Private, in the Calgary Highlanders, if the fifteen intervening years have not dulled my memory. I remember my colleague, Audrey Tannant (then 15, now Principal Trumpet with the Okanagan Symphony) playing the Last Post (not Taps).

Remind me, if I ever wonder or forget: if all I can do is play, then I should play. 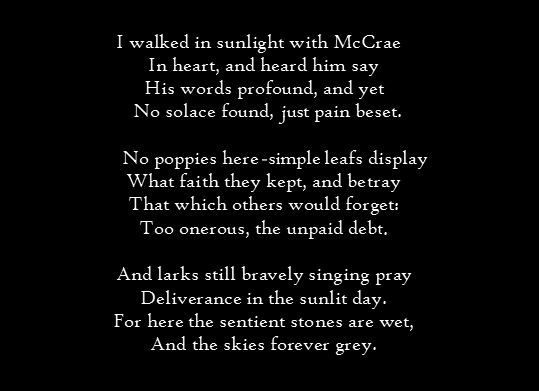