Straight from the “you can’t make this up” file comes recent research suggesting that the consequences of cosmetic treatments of Botox (Botulinim Toxin) may be more than a frozen face, but also a frozen heart.


A study from Columbia University revealed that individuals who receive facial Botox injections don’t just have trouble expressing emotions outwardly, their ability to experience them inwardly is diminished as well. There’s a fundamental biological connection between external physicality and internal feeling, and what’s more, the relationship isn’t unidirectional. Further research into embodied cognition seems to indicate that thought or emotion motivates physiological response – to the extent of affecting even how we sit in a chair – as much as the inverse.


(You’d think I would have figured this out earlier, being a conductor. Perhaps this should be added to that long list of things that we only understand intuitively or implicitly at first, rather than explicitly.)


So the lesson from the world of plastic surgery might be that the churning of the sea of string players in a Venezuelan orchestra is as much a catalyst for the musicians’ passion as it a reaction to it. Yes, it’s choreographed, and it may also serve a cultural function, but the training and subsequent propensity of Sistema musicians to dance in -and out of- their chairs is looking more like great pedagogical insight rather than theatrical insincerity.


The insight goes far beyond the creation and transmission of emotion in performance. Third citation alert: there’s yet more research to suggest that the mere act of a group synchronizing its movements effects some degree of social bonding. (Interesting sidenote: the study involved Americans singing “O Canada.”) The authors of the study noted that soldiers are still trained to march in lock-step even though doing so in combat would be suicide, and that religious ceremonies frequently integrate coordinated gesture and repetition, so clearly the concept has been around a long time. 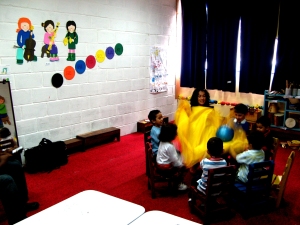 Integrating motion with acoustic aesthetic response isn’t new either. Music in Early Childhood educators will certainly recognize this as one of the concepts underlying Émile Jaques-Dalcroze’s Eurhythmics, and also Carl Orff’sSchulwerk, the fundamental values of which bear a strong resemblance to those of Sistema. Rather than suppressing the natural tendency of the body to react to music, many of these schools explore and celebrate it. And unsurprisingly, they also produce prosocial results in their participants too.


Which makes me wonder, did the Venezuelans really know from the outset how powerful gesture and motion is, musically AND socially? Or is this another thing that should be added to that long list of things that they understood intuitively and implicitly…?

Special thanks to Kate Einarson of the McMaster Institute for Music and the Mind for launching me on this track with the Kirschner & Tomasello study.