At first glance, the image is a provocative one. A road curves across a barren landscape, snow-capped mountains in the distance. The guard rails appear sturdy and unbroken, the pavement new and uncracked; a signpost assures the traveler that a destination lies ahead. The road climbs to its apex on a bridge: there is the promise of a spectacular vista at the zenith of the span, but whatever potential reward that awaits is paired with equal or even greater risk. From the perspective of the traveler still climbing, all that can be seen is a precipitous, terminal drop. 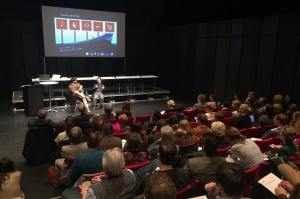 I used this image in Salzburg as a metaphor for Sistema and the current state of program evaluation. Much like the new definition (see previous entry) for the activities in Venezuela, this was an effort to place feet firmly on the ground in an effort to clarify the road ahead. In the slide I demarcated the few waypoints we can identify with certainty. First and foremost, a program of social action through music should produce strong musical outcomes, hence the leftmost orange box. The controlled learning environments and habitual emphasis on discipline in the typical classroom both serve to cultivate better self-regulation and self control skills in program participants (orange box No. 2). Then finally, there are also well established benefits in the realms of cognitive development and academic outcomes. None of this is or should be controversial.


Then there’s the final orange box, which displays a shopping cart. I might have replace the cart with a kitchen sink, because this was intended to symbolize everything else: the reduced crime and recidivism, the improved social cohesion, the diminished drop-out rate, the poverty alleviation – all the things Sistema wants or envisions but doesn’t yet have a mechanism to measure and therefore prove. And thus the shopping cart remains perched on the precipice with its fate as yet unknown, the road apparently disappearing beneath the feet of those walking it. The suggestion is admittedly an unhappy one. Is Sistema then a fool’s errand? A road to nowhere?


This would be a terrible place to leave an audience – and much to my chagrin, that’s precisely where I left the audience in Salzburg, since I didn’t find an opportunity to show my next slide in what was a very free and wide-ranging discussion.


The image I used is that of the Storseisundet Bridge in Norway, and it is famous for the optical illusion it presents of ending in a void, thanks to a lateral curve in its arch. The bridge is complete, and it is beautiful, but by the manner of its design it deceives the first-time traveler on the path. Like the bridge itself, the metaphor makes little sense until viewed in full context.

The first step in crossing the bridge is to acknowledge precisely where we are, and what steps we know we can accomplish: delivering the many existing intrinsic and extrinsic benefits of conventional music education is insufficient, because the means to do that already exist and are worth supporting for that reason only. The as-yet undocumented benefits, those that are not shared with conventional forms of music education, those that are indistinguishable from the vision that compels everyone in Sistema, are up to us to demonstrate and to deliver, but we cannot do that without a firm appreciation for what is already being accomplished. It is from there we can determine what Sistema could bring to the table that might be different.


In addressing a European Sistema audience, I failed to appreciate that Sistema practitioners and leaders in Europe are as unaware of the very real, very damaging tensions that exist between Sistema and in-school music education as are their American counterparts. Unlike Canada, whose national music education association actually has a policy document towards Sistema, the US has only a latent antagonism. Working as I do in both the public schools and Sistema programs, I am acutely aware of these tensions, experiencing them almost daily. Music educators in the established sectors feel disrespected and denigrated by what one British journalist described as the “smugness” of Sistema advocates, and Sistema practitioners wonder why they aren’t openly embraced by their public school counterparts. Much of this friction is a result of the exuberant yet misguided rhetoric from a few quarters, and I openly acknowledge having broadened the rift in the past with ill-advised but snappy sound bites. Any question concerning the commitment and care of in-school music educators vs. Sistema teachers should be laid to rest by the results of Richard Hallam’s latest study,The Reflective Teacher, which reported that English music service teachers place a higher value on both the musical and social development of their charges than their In Harmony counterparts.


Recognizing the value of what we already have, the value of those currently working within existing systems, is the first step to bridging some of these divides. It is also the first step to creating what we mean when we use the word Sistema, and developing what is still just an idea to its full potential as a new socially-oriented practice of music education. Hence the metaphor of the bridge, and the image of Storseisundet.


I was speaking with David Visentin, the Artistic and Executive Director of Sistema Toronto, after the event in Salzburg. We discussed the “Bridge to Nowhere” image and I mentioned that the following unseen slide would have shown the complete span as a promise of what was to come should we have the courage to acknowledge where we were on the road. My pedestrian imagination saw no further than the extension of a footpath, but David’s mind had wings of its own. “I saw the end of the bridge,” he said, “and I immediately thought ‘This is where we fly.’”

2 thoughts on “This is where we fly”