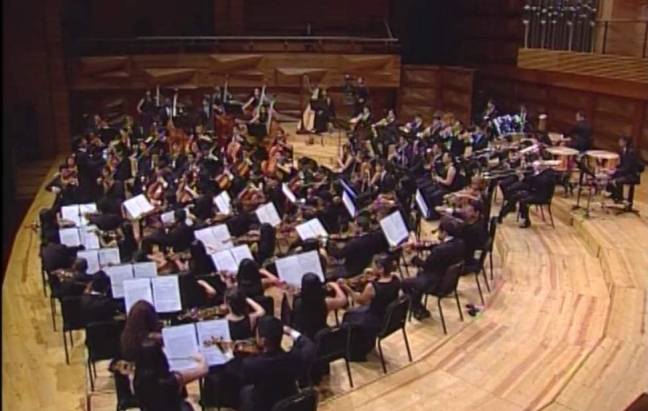 Word was received yesterday from a trusted source that the Teresa Carreño Youth Orchestra, the No. 2 symphonic ensemble of the Fundacíon Musical Símon Bolívar of Venezuela (also known internationally as el Sistema) has been or will shortly be disbanded. The official euphemism of choice in this instance is “merged”, with the other partner in this enforced marriage the No. 3 ensemble, the Youth Orchestra of Caracas.

Nothing has yet been posted on the official site of the Fundacíon, but if true the news comes as no surprise. All top ensembles managed by the Fundacíon have suffered significant talent drain during the ongoing political and financial crisis, with university music programs in the United States and Western Europe, or Central American orchestras the primary beneficiaries of the outflow. According to the source, both orchestras to be merged had lost approximately half their original membership over the past year.

The history of this orchestra is a brief and rarely happy one. Its current incarnation dates back to 2007, when a previously existing ensemble was bestowed with the name of Venezuela’s most famous classical musician and composer before Dudamel. Not coincidentally, 2007 was the year of the Símon Bolívar Orchestra’s breakthrough performance at the London Prom, chronologically perhaps still the best fixed point from which to gauge el Sistema’s international ascendency. With the SBO successfully opening a market, in fall of 2010 the Fundacíon began presenting the Teresa Carreño internationally on a European concert circuit very similar to its more established counterpart. As a measure of the prestige associated with the group, Simon Rattle graced the podium for the orchestra’s performance in Berlin that year, joining a distinguished list of guest conductors that includes the late Claudio Abbado.

Like all activities of the Fundacíon, the high point of the Teresa Carreño came between 2012 and 2013, although early warning signs were emerging. In comparison to the illustrious centres of arts and culture in which the orchestra originally débuted, the 2012 tour saw them perform in Vaduz, Toulouse, and other similar secondary or tertiary destinations. Scuttlebutt from concert promoters was that the orchestra simply didn’t sell tickets the way the Símon Bolívar did. There were brief moments of resurgence: the orchestra was part of the festivities at the Salzburg Festival in 2013 (playing second fiddle to the SBO, also onsite) and it completed a few more tours, but by 2014 the morale in the ensemble was already in rapid decay.

When I arrived to lead a performance of the group in the Fall of 2014, a Fundacíon officer indiscreetly informed me that this was the orchestra “now used to fulfill organizational commitments.” In other words: “Maestro Abreu invited  ____  to conduct and we had to honor the invitation.” An unkinder, less prestigious role for the group within the Fundacíon cannot be envisioned, and the descent from Claudio Abbado to Jonathan Govias may be kindly and understatedly described as “disastrously precipitous.”

I think they enjoyed working with me, although I might flatter myself. In the least, if they didn’t feel inspired and motivated by my conducting (I forbear to speculate), I know they felt respected, treated like the professionals I considered them to be. One musician confided to me that in his time with the group, he had never worked with a conductor who unfailingly gave them breaks and never held them a minute past the scheduled end of rehearsal. Given they had to rehearse from 3-7pm every day, making them play without respite and going later into the evening seemed not just unprofessional, but unproductive to me. For my part, I found them wonderfully flexible, not just willing but eager to consider new musical ideas and move past the usual modus operandi of playing repertoire precisely as played 50 times before in received tradition.  One musician told me that he had played Ravel’s arrangement of Pictures at an Exhibition many times, but I was the first to make sense of the work for him, turning it into a “story” (his word, just in Spanish) as opposed to “many dramatic moments but without relation.”

At a post-concert gathering hosted by musicians, I took the opportunity to sit and listen, asking only the occasional question, gaining an insight into the workings of Sistema from the conversation flowing around me that few have ever been privileged to have. The orchestra’s membership was well aware of the undistinguished role to which it had been relegated, a situation it attributed to a recently terminated Music Director. According to gossip, the conductor had been caught in an affair, either cheating on or with someone related to José Antonio Abreu. The conductor was speedily dismissed, and the orchestra viewed their current assignments as outright retribution. I have no independent verification of this story. There was also marked frustration with the new artistic leader, recently output from the Venezuelan conductor factory, respected for his preparation but deplored for his lack of musical insight.  Most disturbing to me was the dispelling of an idea I had myself propagated: that the TCO formed part of a developmental trajectory ultimately intended to train musicians for the SBO. According to the musicians, there was no progression, no connection. Auditions for the SBO were rarely announced with positions normally filled through opaque process, and TCO members were actively discouraged from seeking positions in other groups. There was nowhere to go, artistically and geographically / literally and figuratively, as touring was simultaneously drying up.

And now, not young enough to excite audiences, not different enough from its civic counterpart, and not famous enough like the SBO to stand on its own, the Orquesta Teresa Carreño is apparently no more, the new entity apparently christened the Orquesta Juan José Landaeta, namesake of the national conservatory and appropriately enough a far less famous Venezuelan composer of the Napoleonic era, and sometime purported composer of the current national anthem. Salacious gossip and economic crisis notwithstanding, the TCO was a victim of poor organizational culture, planning and positioning, never able to establish an identity, and, without forming part of an effective developmental system, never able to serve a distinct purpose. With mass desertion, the Bolívar Fuerte now trending to a Zimbabwean level of worthlessness, and the complete curtailment of all touring activities for the TC, there was no further reason for the orchestra to exist.

My respect and condolences to the musicians.