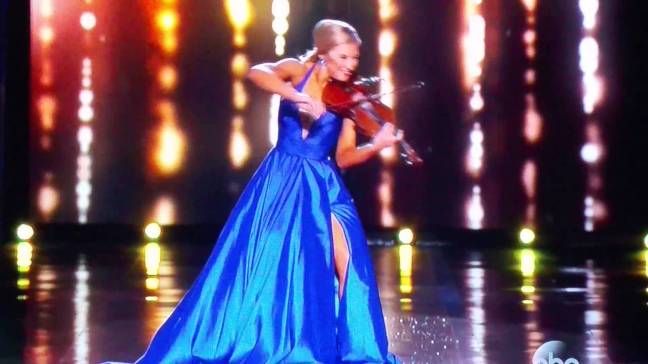 It’s likely that, were it not for some controversy, the most recent Miss USA spectacle would have passed largely unnoticed, as befits an outdated and sexist institution that ironically claims to be progressive and feminist (because seeing a woman in a swimsuit is apparently an essential way to gauge her intellectual capacities). But the competition managed to stir some publicity when the winner, Kara McCullough (please note the website subsection under which this article is categorized) had the gall to suggest during the interview portion of the competition that health care was a privilege of the employed, not a universal right.

For the record, Article 25 of the Universal Declaration of Human Rights of 1948 (ratified by the USA) only guarantees “access to a standard of living adequate for the health and well-being of himself and his family.” A resolutely American interpretation of this would be that in the Land of Opportunity, everyone has access to health care, some just decline to avail themselves of the opportunity to purchase it by being poor/lazy (the two are apparently interchangeable here) in the same way that everyone has the right to a Mercedes if they can afford a luxury car. The right to affordable health care was enshrined in the International Covenant on Economic, Social and Cultural rights of 1966.  Alas for Americans, the United States may be a signatory to the Covenant but has failed to ratify it, placing the nation in such distinguished company of countries like Myanmar, Comoros and Cuba.

The news gets worse: for Americans, the right to education is also part of the same domestically-unratified International Covenant. Don’t look to the Convention on the Rights of the Child for backup: the US is the only nation of the 196 eligible to have failed to ratify that as well. And the bizarrely venerated and highly problematic US constitution? No right to education there either.

So Ms. McCullough is correct. There’s no federal right to health care in the US, and there’s no federal right to education either. Some states constitutionally guarantee education, but lacking any reference to quality, they have no legal obligation to deliver it provided they deliver the same poor education without racial discrimination. There’s certainly no guarantee to music education either, and before Abreuites like Swed start trumpeting the constitution of Venezuela as an example of progressive rights-granting, they might want to actually read the document. The word “music” doesn’t appear at all, nor is there any broader guarantee of access to “cultural education.” It would take a very fanciful legal interpretation to infer a right to music education, with the argument rooted in the “preservation or enrichment” of “cultural values.” (Chapter VI, Article 99)

How long the current Venezuelan constitution may last is another matter, if Maduro gets his way, but ultimately it is a question of philosophy whether anyone has a legal right to something for which they cannot pay, no matter how essential it may be, and on this point the US has demurred and differed to the collective wisdom of the international community. In the US, philosophy isn’t a debate of lex naturalis but a function of political doctrine, and it is the fundamental nature of American discourse to focus on the relative dogmatic or traditionalist adherence of those doctrines rather than basic pragmatism.

If the legal arguments are set aside and a little domestic realpolitik is invoked for once, we might recognize that universal health care and universal education are pragmatically and equally the positions of the informed fiscally conservative and the socially liberal – just for different reasons. Take idealism and compassion off the table. It’s not a question of whether a taxpayer should pay for the care or education of another, it’s a question of whether a taxpayer should pay for the prevention of medical or social diseases or their treatment. The reckoning is inescapable: the bill for the former is just much smaller than the latter, bringing to mind the famous but unattributed quote “if you think education is expensive, try ignorance.” (See here for the uncertain provenance, and curiously, the phrase’s repeated use at the turn of the last century by music schools.) Ultimately the real costs of social and medical inaction are much higher than judicious preventative measures. Public education is literally an investment, providing an immediate fiscal productivity boost (through the babysitting effect) and simultaneously supporting future economic growth. Ms. McCullough herself is a beneficiary of this philosophy, having studied at the publicly-funded South Carolina State University, despite her belief that access should be granted solely to those with the means to pay.

The argument for universal health is the same. In a comparison of OECD nations, the US (The only member without universal health care) has the highest health care costs per capita coupled with the worst outcomes, with life expectancy projected to drop to the level of nations like Mexico and Croatia within the next decade or so. The American taxpayer bears a much higher financial burden for the absence of a single-payer system. Apparently you can put a price tag on “freedom.”

Pretend though the Sistema sector may, there isn’t a fiscally conservative argument for compulsory music education as yet. (There is a compassionate argument: replacing this with this.) The intervention argument (keeping children off the streets) is nonsense: quantitatively, organized sport is more broadly effective and far less expensive, even if voluntary music participation is helpful for some. The creativity argument is similar folderol: learning a musical instrument and acquiring music literacy, mere physical and cognitive skills respectively, won’t guarantee a fertile imagination, in the same way that learning to type (physical skill) and to read (cognitive skill) does not make the literate universally great writers.

The tertiary rationale, following the failure of the first two, is the imparting of collaborative skills and mutual respect. This is the antithesis of current music instruction, which in standard practice focuses on hierarchy and compliance. There’s an element of Pollyanna-like naivety (to which I previously subscribed) in believing that merely putting people in a room together with common purpose is sufficient to teach them to collaborate, surmount interpersonal issues and get along socially. Nothing could be further from the truth. My own research revealed that you can’t make people get along, (I’ve seen more fistfights at Sistema programs than I have in public schools) but you can strategically alter the environment so they focus, wittingly or otherwise, on the bigger picture. There’s plenty of scope for changing lives through music. The first thing that has to change is how we teach it, and I’m still waiting to see that change.

The Miss USA and similar pageants still exists because, under some rocks somewhere, there are enough people still watching it to make the broadcast profitable. There are enough people who believe that that the spectacle is meaningful, transformative and empowering for those involved to justify its continuation. To believe the best of these supporters, perhaps they are suckered into participating by the conviction that in so doing, they support an important social cause, no matter what the numbers truly say. Theatre has trumped integrity, spectacle superseded impact, and the division of the fold into winner (singular) and losers (plural) guarantees that the true beneficiaries of these programs rank in the double digits alone.

Many working for the benefit of a few, a focus on publicity, dubious mathematics to establish impact, and, in 2017, a platform for the propagation of failed ideologies that ultimately reflect the failures of the nation…

I forgot what I was writing about.

One thought on “When beauty pageants, human rights, and music collide”